Many people seem surprised to find out that the chiropractic education process is so extensive. I usually reply, “…whether you’re planning to become a chiropractor, medical doctor, or dentist, it takes four years of college followed by and additional 4-5 years of additional education (med school, dental school, chiropractic college) simply because there is that much to learn about the body to become a competent health care provider. “

Hence, depending on the area of interest a person has in the health care industry, it takes a similar amount of time to complete the educational program.

This chart shows the similarities between three health care delivery approaches, DC, MD, and DPT (doctor of physiotherapy). Curriculum Requirements For the Doctor of Chiropractic Degree (DC) in comparison to the Doctor of Medicine Degree (MD) and the Doctor of Physical Therapy Degree (DPT): 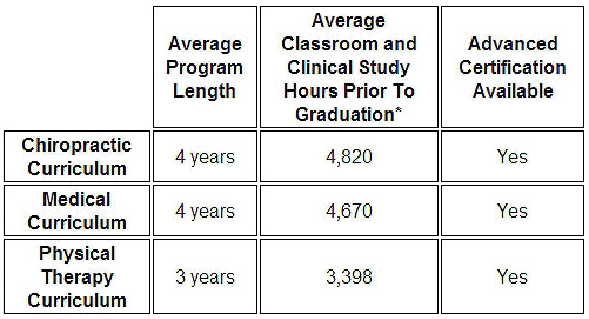 *Does not include hours attributed to post-graduation residency programs.

AS YOU CAN SEE, THE ACTUAL NUMBER OF AVERAGE CLASSROOM AND CLINICAL STUDY HOURS PRIOR TO GRADUATION IS EVEN HIGHER FOR CHIROPRACTIC COMPARED TO THE MD AND DPT CURRICULUM.

It should be noted that this does not include additional educational training associated with residency programs, which are available in the three disciplines compared here.

At one of the chiropractic colleges, the academic core program or Clinical Practice Curriculum consists of 308 credit hours of course study and includes 4,620 contact hours of lecture, laboratory and clinical education.

There are 10 trimesters of education arranged in a prerequisite sequence.

The degree of Doctor of Chiropractic (D.C.) is awarded upon successful completion of the required course of study.

The academic program may be completed in three and one-third calendar years of continuous residency. Graduation, however, is contingent upon completion of the program in accordance with the standards of the College, which meet or exceed those of its accrediting agencies.

In addition to courses included in the core curriculum, a variety of procedure electives are available to the students. These electives are designed to complement the study of adjustive procedures included and facilitate investigation of specialized techniques.

As a doctor of chiropractic, we are committed to providing the highest quality care available to our patients. We coordinate care with other doctors when appropriate in quest of reaching the goal of our helping our patients in the most efficient, economic, and evidence-based approach possible.

By Office Staff Chiropractic Nexpert Chiropractic, The Difference in Effectiveness of Medical vs. Chiropractic In The Treatment of Acute and Chronic Back Pain

The Difference in Effectiveness of Medical vs. Chiropractic In The Treatment of Acute and Chronic Back Pain

Have you ever considered who is the best suited to treat back pain? Since there are so many treatment options available today, it is quite challenging to make this decision without a little help.

To facilitate, a study looking at this very question compared the effectiveness between medical and chiropractic intervention. Over a 4-year time frame, 2780 patients were followed with questionnaires. Low Back Pain patients were treated using conventional approaches by both MDs (Medical Doctors) and DCs (Doctors of Chiropractic).

The study focused on present pain severity and functional disability (activity interference) measured by questionnaires mailed to the patients. It was reported that chiropractic was favored over medical treatment in the following areas:

Similar trends favoring chiropractic were seen for disability but were of smaller magnitude. All patient groups saw significant improvement in both pain and disability over the four year study period.

Acute patients saw the greatest degree of improvement with many achieving symptom relief after 3 months of care.

While both MDs and DCs treatment approaches helped, it’s quite clear from the information reported that chiropractic should be utilized first.

These findings support the importance of early intervention by chiropractic physicians and make the most sense for those of you struggling with the question of who to see for your LBP.

The mission of chiropractic is to help sick people get well, as well as to help healthy people function better in the absence of drugs or surgery. When people are asked, “…what do chiropractors do?” the frequent response is, “…they crack your neck and/or back.”

This sound is known as joint cavitation and it is reported to be caused by the release of pressure created by gases (nitrogen, oxygen, and carbon dioxide) within the joint. It is the same noise produced when one cracks their knuckles. One common myth is that cracking or cavitating a joint will produce arthritis in the joint – this is simply not true.

There have been a number of studies published on the topic of unwanted reactions to spinal manipulation.

In general, side effects, if any, are mild and transient.

When they do occur, they typically happen shortly after the first or second session of spinal manipulation, similar to the post-exercise soreness that occurs when first introducing a new sport or activity.

Unpleasant side effects may occur in between 10% and 30% of patients. They occur more often in women than men, and as previously stated, they seem to occur more often after the first session of spinal manipulation.

The most commonly reported unpleasant reaction is temporary and transient increased pain or stiffness. This reaction usually resolves in 24 hours or less. More rare reports of tiredness, light headedness, and occasional nausea have been infrequently reported.

It seems self evident that more severe problems have the potential to produce short term increases in symptoms. The use of ice, ultrasound and or other modalities can help to minimize any irritation that may occur due to spinal manipulative treatment.

SPINAL MANIPULATION HAS BEEN FOUND TO BE SAFE AND EFFECTIVE FOR UNCOMPLICATED SPINAL PAIN SYNDROMES. MORE IMPORTANTLY, IT MAY ALSO BE A VIABLE ALTERNATIVE TO SURGERY FOR LUMBAR OR CERVICAL DISK HERNIATIONS.

There are many reports on both sides of this subject, with some stating spinal manipulation can increase compression of the spinal nerves in patients with disk herniations as well as the opposite

– that it reduces nerve root pressure.

The good news is that the rate of occurrence is only about 1 in 1- 3 million cases, making spinal manipulation for disk problems an extremely safe treatment option for patient with herniated disks.

Chiropractors will often use low-force manipulation methods for treating herniated disks that do not require a standard type of manipulation thrust.

These spinal methods are sometimes preferred over traditional manipulative techniques for the treatment of herniated spinal disks, but this is case dependent.

To make an educated decision about any type of care you may be considering, you must consider “relative risks”. Simply put, relative risks compare the risk of one procedure with the risk of a second procedure for the same condition.

An example is chiropractic treatment versus drugs known as non-steroidal anti-inflammatory drugs (NSAIDs), which include aspirin, Aleve and Advil (TM).

Further, there is no significant increased risk to add chiropractic care to an existing regime of NSAIDs, thus treating the condition with two different strategies.

Interestingly, studies have reported that patients receiving chiropractic care were able to reduce their intake of drugs, thus, reducing the risks of drug reactions/interactions.

If you are trying to avoid surgery for a spine related problem, your condition is more serious and potential side effects of surgery should be compared with chiropractic.

You should understand any patient who is a potential candidate for spine surgery has a serious medical condition. There is pressure on a nerve and the potential for permanent damage to that nerve exists.

Studies show that chiropractic care often can reduce the pressure on a compressed nerve in the lower back or neck, without surgery.

The most obvious difference between doctors of chiropractic (DC’s) and physical therapists (PT’s) is virtually all DC’s utilize some form of manipulation to restore joint function, whereas only a very small percentage of PT’s utilize manipulation and virtually none of them have nearly as much experience “adjusting” patients or, the training to determine how and when to adjust for ultimate results go beyond just pain relief. Another very important difference is the education curriculum of chiropractors includes many class hours in physiology, pathology, clinical examination, radiology, laboratory testing and interpretation and diagnosis – these are not included in the PT educational process.

Perhaps even more important, chiropractors are accessible to the general public – that is, a referral from a medical doctor is not required. This is not the case for physical therapy as a medical referral is required and, the medical doctor can limit the amount of care rendered. This is an area that the physical therapy groups are currently working hard to change with many debated issues being presented. There are now some states that allow direct access of patients to doctors of physical therapy (DPT’s), a new program created to improve the limited accessibility to PT’s.

With the debate raging on about health care reform, a pilot study indicating chiropractic care and other physical medicine approaches may reduce costs is VERY TIMELY!

In 2008, Welllmark Blue Cross and Blue Shield conducted a 1-year pilot program designed to study the patient quality of care. The researchers concluded that the use of chiropractic and other physical medicine services significantly improved clinical outcomes and reduced health care costs. The 2008 Iowa and South Dakota pilot study included 238 chiropractors, physical therapists and occupational therapists that provided care to 5500 Wellmark patients with musculoskeletal disorders. They reported 89% of all patients receiving physical mediclne services improved at least 30% within 30 days. These statistics were so impressive that they decided to continue the program. Supporters of chiropractic treatment praised the findings, saying that the cost-effectiveness of the method has been documented in several studies.

The president of the American Chiropractic Association, Glenn Manceaux, referred to a 2005 study published in the Journal of Manipulative and Physiological Therapeutics that found chiropractic and medical care have comparable costs for treating chronic low-back pain, with chiropractic care producing significantly better outcomes. Similarly, a study published in a 2003 edition of Spine medical journal found that manual manipulation provides better short-term relief of chronic spinal pain than a variety of medications, he said – “Especially during the health care reform debate, it’s important that chiropractic and other conservative care methods are taken into serious consideration as a cost-effective alternative to the utilization of expensive surgery and hospital-based care.”

Many Medical Doctors Recommending Chiropractic Care For Back Pain Relief

After researching “myths,” Co-author , Dr. Zigler, MD found Chiropractic education is more similar to medical education than it is dissimilar.

Dr. Zigler had integrated Chiropractors into his multi-disciplinary spine center where the Chiropractors screen patients for surgical versus non-surgical care.

He also recommends spine surgeons refer their patients to Chiropractors.

Stress from gravity and lack of motion in our life require us to move our joints to their full range periodically during the day. It is recommended to stretch not just every morning or before workout - we need to create good habit of stretching exercise. Just one repetition of exercises repeated every one, two or three hours will help get your body up and keep it going with your challenging day.